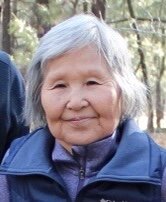 Katsuko Smith, 80, passed away peacefully at her home on March 11, 2022, after a courageous battle with cancer. Born in Tokyo, Japan January 10, 1942, the first of two daughters of the late Toru Kobayashi and the late Yoshiko (Kodaira) Kubo. Katsuko was primarily raised, along with her younger sister, Noriko, by her mother and stepfather, the late Chiaki Kubo, in Tokyo; surrounded by the love and support of her maternal grandparents and maternal aunts and uncles.

After graduating high school in 1960, Katsuko began working at Yawata Iron and Steel. One day she attended a social event hosted by the USO where she met the love of her life, Joseph S. Smith, a dashing member of the US Air Force. After two years of dating the couple married on February 23, 1962, at the US Consulate in Tokyo; beginning their 60-year adventure as a loving couple. Joseph and Katsuko lived in various places as Joseph continued his career in the US Airforce and had 3 children along the way - daughter Sharon, daughter Shirley, and son Joseph Junior. They raised their children in Tokyo and Fukuoka, Japan; Battlecreek, Michigan; Alexandria, Virginia; and Salt Lake City, Utah. During this journey Katsuko was often raising the children while Joseph was stationed or deployed elsewhere and somehow found time to conquer the English language, attend Utah Community College, and earn her nursing degree, and work as a Labor and Delivery nurse.

After their children were grown, they continued to enjoy their love of the world both prior to and after their retirement. They lived in Tokyo, Japan; Tucson, Arizona; Yoshi Cho, Japan; Buhl ID; and returned to Tucson in 2018.

Katsuko had a variety of talents, interests, and achievements. She held a nursing license in two countries, was a skilled seamstress; was trained in Ikebana, and enjoyed both the outdoors and city life. She was a long-distance runner for many years and a fan of both classical and rock music. Katsuko would be the first to say that her proudest and most notable achievement was her creation of her family and her role as wife and mother, grandmother and great grandmother. She will leave an irreplaceable void in our family, and we love her as she loved us- fiercely, loyally, and honestly.She is survived by her husband, Joseph S. Smith Senior; their children, Sharon Speet and husband Scott, Shirley and husband Jim Salka, Joseph and wife Santy; their grandchildren, Samuel (Melanie Geiser) Speet, Savannah (Taylor) Tortorice, Lucas Smith, Max Smith and their great-grandson Giovanni Tortorice; her sister, Noriko Kobayashi; her aunt Junko Kodaira and her uncle Mitsuo Kodaira; her half-sister Rumiko Kobayashi; along with many cousins and many friends.

To send flowers to the family or plant a tree in memory of Katsuko Smith, please visit Tribute Store
Thursday
24
March

Share Your Memory of
Katsuko
Upload Your Memory View All Memories
Be the first to upload a memory!
Share A Memory
Send Flowers