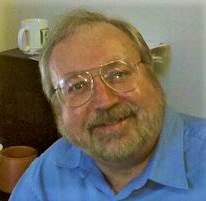 Herschel Wayne Ward, Jr., ( 1953-2021), also known as Bud Ward, was a warm and brilliant man. He was born and grew up in the Chicago area, where he excelled in the sciences, becoming involved with early computers while still in high school. He was also talented in the arts, sang in a prize-winning choir and demonstrated his sharp wit by creating parody skits which won high school level contests at the Illinois State Fair.

Bud attended college at the Illinois Institute of Technology and Computer Data Institute, and moved to the Tucson area in 1977. From computers to astronomy, from science fiction to animal rescue, Bud continued to be a man of numerous interests and talents. He opened the first retail computer store in Tucson, later travelled the world as a partner in Midian Electronics and also worked for Securaplane, Lux Aviation and Panacis Engineering. He holds three US patents in wireless communications and computers, and worked most recently as a consultant in the computer field. Bud will be profoundly missed by his family and friends in both Tucson and the Chicago area. He is survived by his sister, Helen (Lyn) Ward Page, her husband Joseph Page and their daughter, Julia Page; sister-in-law Liane H. Ward, nieces Errin and Rachel Ward; and numerous cousins and friends.

Donations in Bud’s name may be made to Best Friends Animal Society.

To send flowers to the family or plant a tree in memory of Herschel Ward, please visit Tribute Store

Share Your Memory of
Herschel
Upload Your Memory View All Memories
Be the first to upload a memory!
Share A Memory
Send Flowers