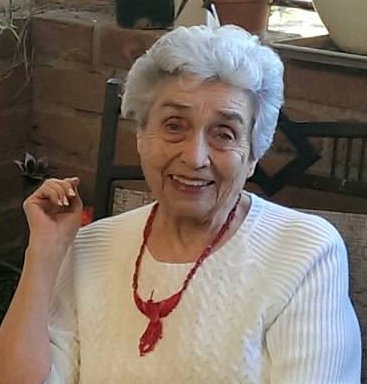 An angel was born on March 9, 1925 to Ernestina and Porfirio Giron and on May 15, 2021 this angel earned her wings and was welcomed into the kingdom of God. She is survived by her four sons and their families: Tom (Mary), Tim (Phyllis) Al, Paul (Carmen), grandchildren-Tim (Heather), Jennifer (Colin), Gloria (Steve), Julie (Amanda), Dayne, John, David (preceded in death); great grandchildren, Devin (Doc), Morgan, Antonia, Kevin, Olivia, Paige; two great-great grandchildren, Xander and Link, and many cousins and friends.

Gloria Giron Baron was born in Miami, Arizona. Her parents moved to Solomonvile, Arizona where she and her sister, Stella, grew up. Her father died when she was only three years old and therefore her Mom had to work long hours at a local general store to provide for her small family. Gloria’s grandfather helped care for them during the day. Gloria told stories of helping her grandfather care for her baby sister and when she got a little older, working in the store with her mom filling orders for flour, sugar, etc. While attending elementary school, Gloria often served as an English/Spanish translator. She graduated from Safford High School in 1942 at the age of 17. She was hired by Bechtel Mining Corporation to work in the office. She quickly saw that the office needed organization and stepped right in to set new office standards. One of the many tasks she was responsible for was billing and handling of invoices. She had what some might call a photographic memory. If the company needed an important document, she knew exactly where to find it or at times remembered details off the top of her head. She was a huge asset to the company.

In 1943, she moved to Tucson, AZ and joined the Cadet Nursing Core during WWII for nurses training at St. Mary’s Hospital. She was in the class of 1946. In November, 1945, she was chosen Queen Nightingale

for the Davis-Monthan N.C.O Club. Due to the end of WWII, this program was closed. Gloria didn’t have the funds to complete the final semester and earn her certificate but that did not stop her from helping people.

Gloria and Bob met when she was 15 and he was 18 through family members. The romance started immediately. It was a long-distance romance due to the war. Serving his country during the war, he could not let Gloria know where he was stationed, but each time he arrived back to the states, he always wired roses to her from New York. They were married March 24, 1946 and were married for 58 years. They had four sons who kept them very busy. When the boys attended elementary school at St. John’s; she would often volunteer her time and medical expertise to all the students during the yearly health events. She worked many years at several doctors’ offices in the downtown Tucson area and attended night school to learn new technology and improve her office skills. Gloria and her sister often modeled clothing for Jacome’s Department Store.

She cared for her Mom through the years as well as many friends and family. She was a kind, gracious, caring, quiet woman who would do anything for you and would never expect anything in return.

Gloria and Bob found a love in Square Dancing. They attended and graduated from Square Dance Lessons April 22, 1965. They continued being involved with this passion through 1975 including working on the fundraising to build the Square Dance Center on North First Avenue.

In 1987, Gloria and Bob moved to Oracle, AZ to retire. This small town life and the beautiful area were just what they both wanted and loved. It was peaceful and serene. It was there they met more wonderful friends, joined the church at St. Helen’s and became active in the group who walked for health. In 1987, they completed the “Arizona

Diamond Jubilee Walk” being the overall TOP winners, walking a grand total of 689 miles each. Gloria said they walked four miles a day including Saturday and Sunday.

Gloria had a wonderful life and expressed that every day to the end. She felt loved and was very proud of her family. She will be missed.

Due to COVID restrictions, the Memorial Service will be limited to a total of 35 people only.

To send flowers to the family or plant a tree in memory of Gloria Baron, please visit Tribute Store

Share Your Memory of
Gloria
Upload Your Memory View All Memories
Be the first to upload a memory!
Share A Memory
Send Flowers