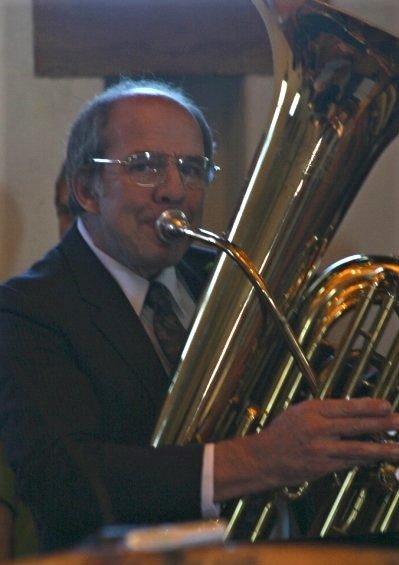 Gary Thomas, 75, died April 14th in Tucson, AZ from complications due to Parkinson’s Disease. An eternal optimist and positive person, he told anyone who would listen that he considered it the “gift of Parkinson’s”, as he met so many people and had so many experiences he would not have had otherwise without the disease. Emblematic of how Gary lived his life, he could take any situation and turn it into a positive. This enthusiasm for life, along with his quiet sense of humor and humility, helps explain how he was beloved by everyone he met.

His love of making music was renowned. He was a life-long sousaphone and tuba player who was very proud to have been a member of the sousaphone section of the University of Wisconsin Marching Band. (And always felt cheated that the football team didn’t make it to the Rose Bowl when he was a member of the marching band!) He had a great love of performing in Tuba Christmas concerts every December, beginning in 1977 and participating in them at every opportunity, including several at Rockefeller Center in NYC. It took much persuading the year he had a pulmonary embolism after Thanksgiving that maybe he should sit this one out, given he was discharged from the hospital just a week prior. He played in his last one in 2019 in Tucson. The beauty of dozens to several hundred tubas performing beloved Christmas carols is a sight to see, and he would urge you all to attend one this December, or better yet, learn to play tuba and perform in one.

He was a devout man of quiet faith. He sang in church choirs all of his life, actively singing right up until COVID. Those churches from Connecticut to Florida to Arizona were also blessed with tuba solos, a rare part of liturgy for any church. He was an active member of any church he belonged to including serving as Deacon, Trustee, and many other committee roles, as well as faithfully singing in the choir. He was a proud member of Mt. Carmel Congregational Church, North Guilford Congregational Church, First United Methodist of Homestead, and his final home church of Southside Presbyterian Church in Tucson.

He worked most of his professional career at Pratt and Whitney Aircraft. Beginning as a draftsman on the early Boeing 747 engines, the majority of his career was as a materials test engineer. He actively worked on the compressor and turbine blades of the entire range of P&W’s military and commercial engines. He was very proud of his work at Pratt and Whitney and the engines he worked on. He enjoyed discussing them with pilots of any flight he was on. His children also knew that if you were discussing a recent flight, you should know what kind of engines were in the airplanes you were flying on.

Always active, in high school he several times rode his bike from his family home in Madison, WI to Hamden, CT, where he later settled and raised his family with his first wife, Wendy. This love of activity included swimming laps even after working two jobs to support his young family. Later in life he traveled North America in an RV with his second wife, Karen and their dog Ginny. His Parkinson’s never kept him from being active and in fact, when he was given the diagnosis, he jumped into all activities that might help him forestall symptoms, including voice lessons, Parkinson’s exercise classes, Dancing with Parkinson’s, Voice and Movement physical therapy, and many different sports. When he moved to assisted living in Tucson to be closer to his son and younger grandkids, he would do literally every activity on the activity schedule, and occasionally generated his own. No grass grew under his feet! Even when eventually wheelchair bound, he would travel when possible, to New Mexico and even Nebraska for his niece’s wedding. His willpower to keep going never gave out.

He will be buried in North Guilford, CT at a later date. Donations can be made in his memory to the Michael J. Fox Foundation for Parkinson’s Research, at https://www.michaeljfox.org/donate.

To send flowers to the family or plant a tree in memory of Garold Thomas, please visit Tribute Store