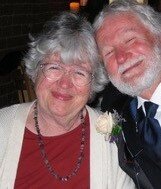 Frances (Fran) Heineman Janssen was born in Tucson, Arizona to Kathryn Mial and Robert Emil Heineman on April 20, 1934. She died on December 9, 2022 after a short illness. Many thanks to the care givers of La Paz Assisted Living and Aria Hospice for their wonderful care of Fran. She felt your love and compassion.

A graduate of Tucson High School, she got her bachelor’s degree  from Wellesley College. She returned to Tucson and wrote for the Star Newspaper, met Pierre and after a very fast courtship married him. Her daughters Kathy and Vicky came soon after. Fran never lost her love of learning and went back to school (University of Arizona) earning two master degrees in Middle English and Secondary Education. She taught English and Journalism at Cholla High School for several years. Her last career was as the Office Manager of the Hydrology Department of the University of Arizona.  After retiring she travelled, wrote poetry and started painting. She was a member of the BPW and book clubs. Fran was always very politically active and was on the board of Planned Parenthood and a Precinct Committee Person.

Fran will be interred in the Columbarium at St. Philips in the Hills Episcopal Church on Wednesday December 28, 2022 at 1:00pm. There will not be a reception following the service due to health concerns.

Share Your Memory of
Frances
Upload Your Memory View All Memories
Be the first to upload a memory!
Share A Memory