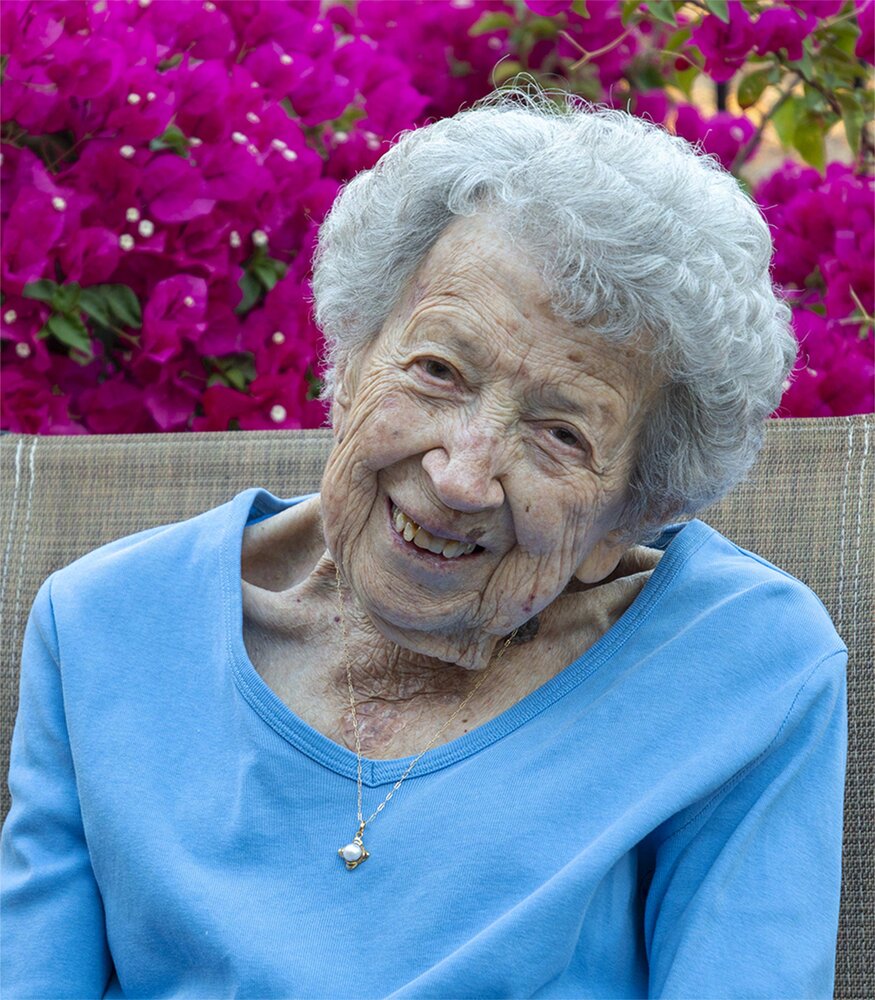 On Saturday, November 26, 2022 Frances Marie (Stallings) Mahoney passed away peacefully, at the age of 98, surrounded by family at her home in Tucson, Arizona.

Frances was born the youngest of four children on April 15, 1924 in Waterflow, New Mexico, to Lawrence L. and Rosabelle Stallings who were early homesteaders from Kentucky. Her family was influential in establishing a Catholic community in Waterflow and Frances was educated by the Ursuline nuns at Sacred Heart Academy.  These early years established the foundation for her strong Catholic faith that sustained her throughout her life.

Frances experienced a unique upbringing. Her childhood home was on the family ranch and orchard across the San Juan River from the Navajo Reservation. She often recounted stories about Navajo culture and the relationships her father cultivated with the Navajos working on their ranch.  Her father had learned the Navajo language and their home was frequently visited by tribal members seeking assistance in dealing with government matters.  Growing up, Frances assisted her mother with traditional household chores but also helped her father on cattle drives to their summer pastures in Colorado.

Following high school, Frances attended Mount Saint Joseph Junior College in Maple Mount, Kentucky, graduating in 1943 with a degree in Elementary Education. For the next three years, Frances taught in elementary schools in Cloudcroft and Santa Rosa, New Mexico before returning to college at the University of New Mexico, where she graduated with a degree in Business Education in 1948.  Frances then moved to Farmington, New Mexico and taught high school business classes. It was during this time she met and married William Thomas (Tom) Mahoney in May, 1951.

The couple made their home in Durango, Colorado and together raised five children. In addition to being a devoted wife and mother, Frances continued her career in education, teaching at St. Columba School in Durango from 1969 to 1977. Following her retirement from teaching, Frances volunteered with the Mercy Hospital Auxiliary. She and Tom moved to Arizona in 1983 where they enjoyed many years with friends and extended family.

Frances was a teacher her entire life. She enjoyed time in the classroom with students but following retirement from formal education, she continued to teach the more important lessons in life by example.  Her family, friends, neighbors and caregivers witnessed her strength, determination, and self-discipline while at the same time appreciating her gentle soul which radiated kindness, patience, and gratitude.  She will be missed.

A Funeral Service will be held in Tucson on Tuesday, January 17 at St. Elizabeth Ann Seton Catholic Church at 11 a.m., with a luncheon celebrating Frances’ life to follow. Attendance at either one or both is welcomed.  If attending the reception only, call 520-742-1638 for location details.

In lieu of flowers, donations in her memory can be made to:

Funeral Arrangements were made with Adair Funeral Homes

To send flowers to the family or plant a tree in memory of Frances Mahoney, please visit Tribute Store

Share Your Memory of
Frances
Upload Your Memory View All Memories
Be the first to upload a memory!
Share A Memory
Send Flowers