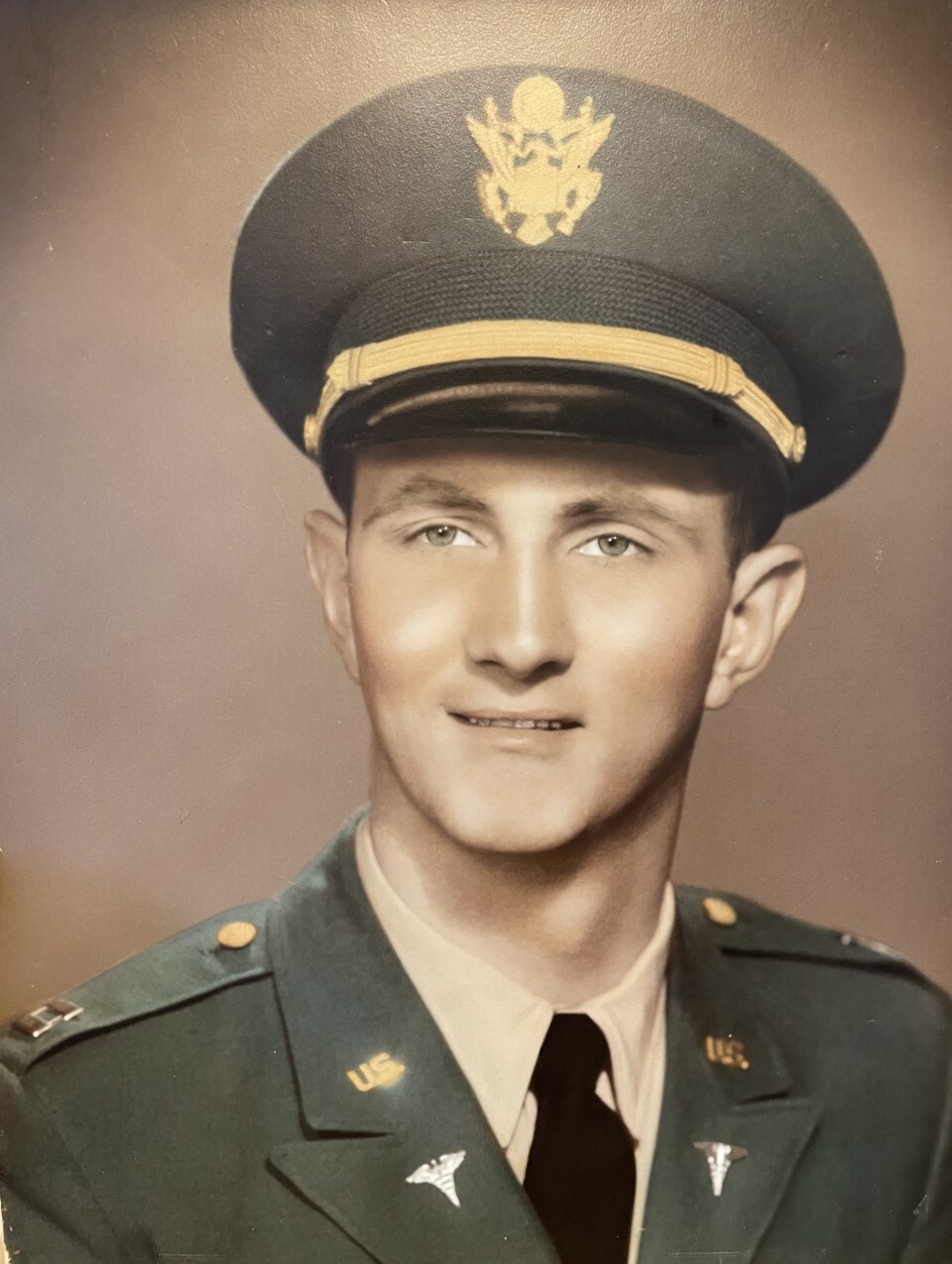 James C. Brown, MD, 93, died August 13, 2022 at the Casa de Luna Care Home in Tucson, Arizona under the compassionate care of the TMC Hospice team. Jim was born June 25, 1929 in Pulaski, New York, the fourth of six children born to Eva Ingersoll and W. Stanley Brown. In 1951, he earned his Bachelor’s in English Literature at Hamilton College, where he excelled in sports, academics, music and campus leadership. He loved to humbly share self-deprecating stories downplaying his sports accomplishments. As a result, his family and friends have memorized the fateful football play, “68 reverse pass,” when Jim threw a wobbly touchdown pass to his teammate “Duck Foot” Henderson, during a freezing rain storm. Indeed, there are many wonderful stories which will sustain his surviving family, Joan Brown, his devoted wife of 65 years, and their 5 children, Karen Lane (Tucson, husband Walter Lane, children Dylan and Emma), James C. Brown, Jr. (Phoenix, wife DeeAnna Brown, children Paige Balduzzi and James C. Brown, III), Kimberly Hathaway (North Carolina, husband Robert Hathaway, children Rachel, Noah and Benjamin), Mark Brown, MD (Texas, wife Ingrid Nystrom, children Nathan and Alexandra), and Kate Krenke (Queen Creek, husband Jason Krenke, children Delaney, Molly and Piper). In 1955, Jim graduated from University of Rochester College of Medicine and married Joan Staub prior to his commissioning in the US Army Medical Corps with a 2 year assignment to Germany. There, Jim and Joan began a marvelous and passionate journey highlighted by family, faith, friendships, and service to others. After Germany, the family returned to Canton, New York, where Jim served the small college community as a Family Practice Physician. Over the next 15 years, Jim performed more than 1,000 newborn deliveries, occasionally racing over impassable roads to the hospital or to patients’ homes on a snowmobile on wintery nights. During the day, he cared for patients in an office built adjacent to the family home and at the local hospital. In 1973, the family moved to Rochester, New York, where Jim entered a Radiation Oncology residency program at the age of 44. In 1976, this led to Jim’s new position at Good Samaritan Hospital in Phoenix, Arizona, where family adventures and fun were highlighted by annual family houseboat trips to Lake Powell. Jim continued to compassionately care for patients suffering with cancer until 1991, when he retired from Good Samaritan to tend to his family, his golf game, and his love of music. All along the way, a faithful dog was by his side. Throughout his life, Jim was kind, loving, warm, compassionate, caring, gentle, fun, witty, gracious, loyal, athletic, self-effacing, selfless and service-oriented. His death saddens us, but we are buoyed by one another, the values he modeled for us, and the memories of a life so well lived. In lieu of flowers, please give to your favorite cause in Jim’s memory. No formal memorial ceremony has been scheduled.

To send flowers to the family or plant a tree in memory of James Brown, please visit Tribute Store