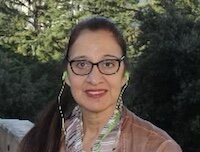 The Lord took Herminia B Personett (Jauregui) on August 7, 2022. Beloved wife of Steve Personett, daughter of Jennie Borboa Jauregui, sister of Rose Portillo and Violet Ayers (Jack), aunt of Bradley Bingham. Preceded in death by daughter Stephanie, and father Ernest “Pilo” Jauregui. Herminia impacted the children of the Tucson community with over 33 years of service as a Teacher, Instructional Coach, and Volunteer at Tucson Unified School District. She was also a Eucharist minister. Mass will be held 10:30AM on Friday August 12 at Saint Peter and Paul Church. Interment at Holy Hope Cemetery at noon. Family requests donation to cancer research rather than flowers.

To send flowers to the family or plant a tree in memory of Herminia Personett , please visit Tribute Store
Friday
12
August

Share Your Memory of
Herminia
Upload Your Memory View All Memories
Be the first to upload a memory!
Share A Memory
Send Flowers