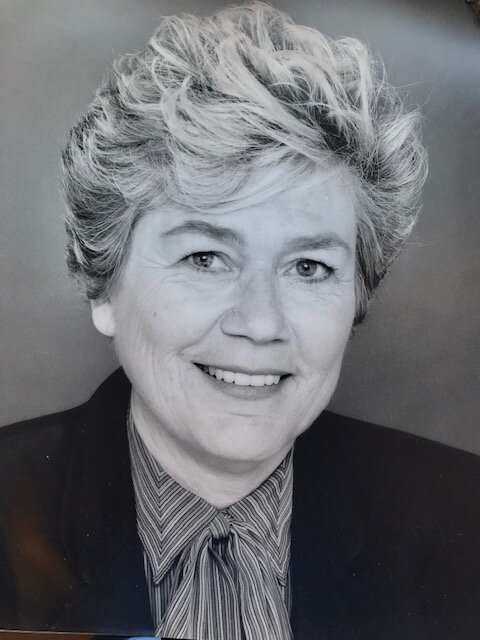 Born to Harry and Inga Schuck in Seattle, WA in 1936, Shelby attended Franklin High School and later graduated from the University of Washington where she obtained a bachelor’s degree in communications in 1957. She was also a member of the Chi Omega sorority. Loving the snow, Shelby spent the winters of her youth in the Cascade Mountains of Washington State, competitively downhill skiing and working as a ski instructor for Fiorini Ski School.

A trailblazer for women in media, in 1958, Shelby started her career as an ad traffic manager for Seattle’s KVI-Radio and KIRO-TV before becoming an on-air reporter, writer, film editor, and documentary producer for the station. At the time, she was credited by her colleagues as having the longest tenure of a woman reporter on TV in Seattle. In 1965, she became the only woman to anchor a newscast on CBS’ WBZ-TV4 in Boston. She later led the first all-female prime time newscast in 1977. Later in her career on special assignment, she became known for her storm chasing and federal and state-level political reporting. She was often described by her peers as dedicated, tough, and resourceful.

When asked about her most iconic interview, she spoke about how while in a boat, in Washington State’s Puget Sound, she was reporting on Namu the orca, a whale in captivity at the Seattle Aquarium. Namu came up, splashed her, but she just kept on reporting without pause. This is also the same iconic footage that landed her the role at WBZ in Boston.

She left her mark on New England by reporting during raging Nor’easter storms, The Boston Globe used to measure total snowfall against her height by referencing measurement in “Shelbys” instead of feet. She had many fans who loved when she came out of retirement to report on major storms. On January 30, 1987, the Mayor of Boston, Raymond Flynn, declared it, “Shelby Scott Appreciation Day,” to thank her for “boldly bringing the news live where no other newsperson had gone before.”

After her 30+ years at WBZ, she was elected National President of the American Federation of Television and Radio Actors (AFTRA) union in 1993, where she served an unprecedented four terms fighting for TV and radio actor’s rights, then continued as vice-president. She helped lead the first attempted merger with the Screen Actors Guild (SAG), now SAG-AFTRA.

Receiving many accolades over the course of her broadcasting career, she was awarded United Press International’s Tom Phillips Citation for Excellence in Broadcasting, the William F. Horner Jr. Award from Suffolk University for Excellence in Journalism, an Honorary Doctor of Humane Letters from Notre Dame and was inducted into the Massachusetts Broadcast Hall of Fame in 2008. She also was awarded AFTRA’s George Heller Memorial Gold Card No. 42 in 2009.

When asked about being a woman on the news she once said, “I was just too stupid to know that women weren’t supposed to be on television doing news. Back in those days, they said we weren’t credible. I think I’ve proved them wrong.” And she did.

Shelby was an avid New England Patriots and Boston Red Sox fan and would proudly adorn her Red Sox cap as she strolled down the streets of New York post-American League Championship win against the Yankees that advanced the Red Sox to the World Series. If only to taunt her friends and colleagues with their victory and her infectious laugh. She was fierce in her stance on human rights and political opinions and loved a good political debate. After retiring from the media industry, Shelby spent her time as a snowbird between her quaint cottage off the coast of Portland, ME where she loved to comb the beach for sea glass and make jewelry. As well as Arizona, where she soaked up the heat during the winter months by playing golf and hiking. She was also extremely fond of animals and wildlife, and adored her cats.

Shelby is survived by her brother, Frederick (Rick) Schuck and sister-in-law June Schuck; nieces Heather Schuck; Stacy Friesz (Braden); and great-niece, Eleanor Friesz, as well as many beloved friends and colleagues she’s had the great pleasure of knowing throughout the years. She will be truly missed.

Her family will be gathering to celebrate her life privately. In lieu of flowers, we ask that you help us honor Shelby’s legacy in broadcasting and journalism by making a donation to the Alliance for Women in Media. https://allwomeninmedia.org/foundation/make-a-donation/

Share Your Memory of
Shelby
Upload Your Memory View All Memories
Be the first to upload a memory!
Share A Memory