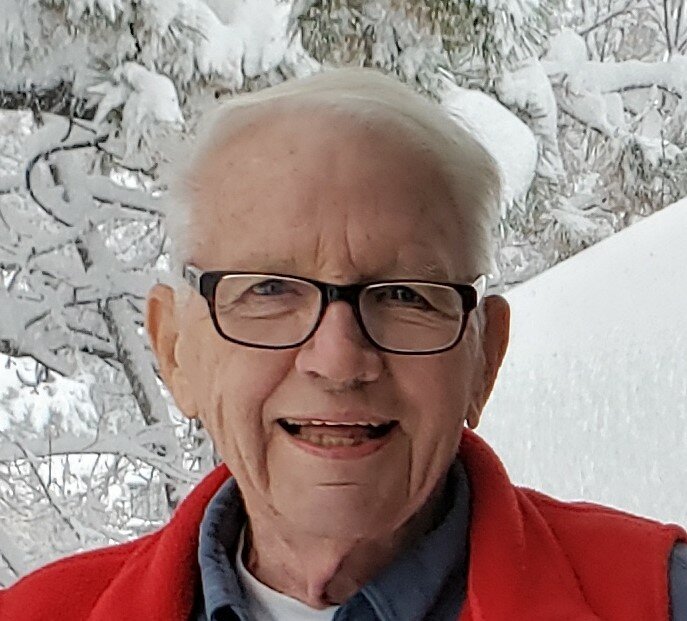 John grew up on a farm in Kennett Square, Pennsylvania. He graduated from Phillips Academy (Andover) in 1950 and received a BA in Economics from Cornell University in 1955. While at Cornell, he met Laura (Lolly) Treman, and they were married in 1956.

John was commissioned in the US Navy through the Cornell Naval ROTC program in March 1955 and served as a combat duty pilot aboard aircraft carriers in 1956 and 1957.

In 1958, John and his family moved to Tucson, where he worked as a stockbroker and served as a Naval Reserve pilot. In 1966 the family moved from the Indian Ridge neighborhood farther east towards Mt. Lemmon. There John added a corral that was home to three horses and a pen for a 4H pig named Herb; an effort to raise chickens proved less successful.

He was appointed Commander of the Arizona Air National Guard in 1983, responsible for 2700 men and women, and promoted to the rank of Major General in 1987. “The unit was staffed primarily by part-time pilots, a mix of bankers, farmers and others who had other lives with their day jobs. Then we’d come together and it was another world.”

John was also a successful stockbroker for more than 40 years, retiring as a vice president at Prudential Securities in 2001.

From the mid-1970s, John also became deeply involved in raising and marketing Arizona pistachio nuts as part of the Arizona Pistachio Company. What began as an investment became a venture in which he took great pleasure, from the orchards in Bowie to the marketing and sales efforts.

In 1997, John and Laura moved into his late parents’ adobe home – “the Eagle’s Nest” -- off Redington Road. John treasured the desert and the abundant wildlife that thrived just outside their door, including hummingbirds, quail, rattlesnakes (which he regularly relocated), javelina, and deer. He once watched a mountain lion wander across their patio.

John relished working on the house, as well as grading the drive on his tractor, tinkering with the windmill pump and well, and gardening.

John strongly believed in giving back to the community and was a generous supporter of many local and national charitable causes. He treasured Tucson’s desert and the abundant wildlife, and was an avid Arizona Wildcats booster.

He will be remembered as a kind, generous man who shared his joy in life with all he met.

He is survived by Laura, his wife of 66 years; children Peter (Marty), Kristin, and Arthur (Amy); grandchildren Matthew (Allison) and Christopher; sister-in-law Carol; and nephews Robert (Erin), Duncan, and their families.

In lieu of flowers, donations in John’s memory may be designated to the YMCA of Southern Arizona, 60 W. Alameda Street, Tucson, AZ 85701 in support of scholarships for military kids to the Triangle YMCA Ranch Camp or to the YMCA’s Armed Services Support Fund. Donations can also be made to the John and Laura Almquist Fund at the Community Foundation for Southern Arizona, 5049 E. Broadway Blvd., Suite 201, Tucson, AZ 85711, which supports several nonprofit organizations.