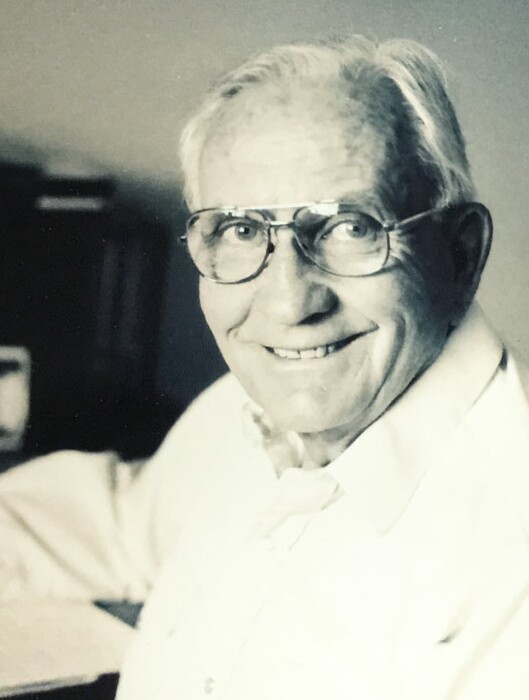 Charles Jarvis Harriman, known as “Jarvis,” died peacefully of natural causes, at age 99. His loving wife of many years, Nancy Dole Harriman, predeceased him in July 2021. Both had resided in assisted living at Sierra del Sol in Tucson.

Born in Portsmouth, Rhode Island, into a family with clergy on all sides, Jarvis was the devoted son of the Reverend Charles Jarvis Harriman and Kathryn Cocroft Harriman.

Jarvis’s early life with sisters Kit and Ellen (Olivier) centered around the Episcopal church of St. James the Less in Philadelphia, where the Harrimans welcomed many guests, including members of the “Oxford Group,” which emerged as Moral Re-Armament (MRA), now known as Initiatives of Change. Jarvis graduated from the Germantown Friends School, a Quaker school in Philadelphia, in1940. He was the fifth generation Harriman to attend Trinity College, in Hartford, Connecticut. With World War II looming, he took deferred enlistment in the Army and finished his degree in three years, earning a Phi Beta Kappa key.

In World War II he served at a psychiatric hospital on Saipan, mostly treating post-traumatic stress disorder, PTSD. From Saipan the U.S. launched the B-29s that dropped the first atomic bombs in August 1945.

Strongly affected by his war experience, he renewed Oxford Group/MRA connections and then worked for the group for the next 22 years. Jarvis did film and stage productions in the United States and Europe and supported tours to Asia. Of special interest were MRA tours in war-torn areas of Europe, like West Germany, offering moral and spiritual messages as alternatives to fascism and Marxism. The group’s message of reconciliation and conflict resolution also influenced unions and labor/management relations in several countries.

When Jarvis first met Nancy Dole, a lovely nurse at the Mackinac Island MRA facility in 1947, he admired her from a distance. After meeting again in 1966, they were swiftly married in Darien, Connecticut, surprising and delighting their families. They spent a year in MRA’s New York office, then helped run “Up With People” tours across the Midwest, California, Texas, and the great cities of Italy.

In 1968 Nancy was called to nurse the wife of an MRA director, in Tucson. Jarvis helped build an Up With People headquarters and the organization’s fleet maintenance facility in the city.

After their years with Up With People, in 1970 Jarvis became Executive Director of the Tucson Festival Society, while Nancy worked as a nurse. Jarvis served for 16 years and was president of the broader International Festival Association in 1983.

In these roles Jarvis valued making room for others and their innovations. He credited “Tucson Meet Yourself” for going beyond the Tucson Festival Society’s purview, showcasing the distinctive European, African American and Native American communities in the city with their specialty foods, music, performing and visual arts. He helped start an International Mariachi Conference in Tucson, which is still going forty years later.

Jarvis authored two books: The Man from the Hills, a Biography of Leland Case, 1994, Westerners International; and Matched Pair, the Elys of Embassy Row, Pooh Stix Press, 1999. He self-published This Is My Story, a Memoir, 2010.

Nancy was, to him, “an incredibly lovely and natural person.” They enjoyed good communication, healthy eating and exercise, never taking each other for granted. Jarvis and Nancy were always grateful for the love and support of friends old and new, and of family from all sides and generations. They valued contacts from school and college, work and travel, and the many places they could call home.

A ceremony is planned for later in the year at the Harriman family plot in Portland, Connecticut

To send flowers to the family or plant a tree in memory of Charles Harriman , please visit Tribute Store