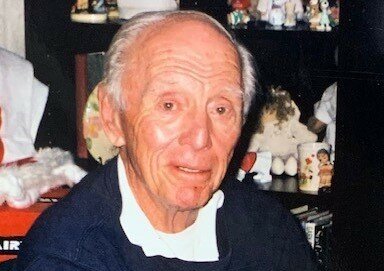 James “Jim” Lehmann, 92, a resident of Durango, Colorado and Tucson, Arizona died peacefully on Thursday, February 17, 2022. Jim was born in Dayton, Ohio on December 3, 1929, to Clarence and Alma Lehmann. He graduated from the University of Dayton in 1952, and then earned his M.D. degree from Saint Louis University in 1956. After graduating from medical school, he interned at Tripler Army Medical Center in Honolulu, Hawaii and was subsequently stationed in Japan until returning to The Ohio State University in Columbus, Ohio in 1959 for his medical residency in Otolaryngology. In 1960 he married Barbara Berens. They were married 61 years and had three children and six grandchildren. Jim practiced medicine in Albuquerque, New Mexico from 1962 to 1984. In addition to practicing medicine, he achieved the rank of Colonel in the New Mexico Air National Guard. After many years of skiing, camping, and backpacking in Colorado, upon his retirement from medical practice, he and Barbara bought and operated Silver Spruce Lodge in Vallecito, Colorado. They operated the lodge until 1998 and then relocated to Durango where they were active members of The Four Corners Rose Society for which Jim served a term as the Society’s President, and for twenty-one years, Jim and Barbara delivered Meals on Wheels in the Durango community. A lifelong golf enthusiast, Jim was a member of Hillcrest Golf Club in Durango where he played golf for more than thirty years. In addition to Jim’s many accomplishments, he will be remembered as a lifelong learner with an adventuresome spirit and willingness to undertake new do-it-yourself projects no matter how daunting. Jim was preceded in death by his parents, sister Rita Lehmann and his beloved dog Sammy. Survivors include his wife, Barbara; their children, Gregory (Christine) Lehmann of Brookfield, Wisconsin; Dede (Robert) Glass of Livermore, California; Jennifer Lehmann of Tucson, Arizona; grandchildren, Lauren (Clark) Chisholm, Jonathan and Daniel Lehmann, Andrew (Karina Reyes) Glass and Emily and Maxwell Derickson; two siblings; Joan Palmer and Samuel (Paula) Lehmann.

To send flowers to the family or plant a tree in memory of James Lehmann, please visit Tribute Store