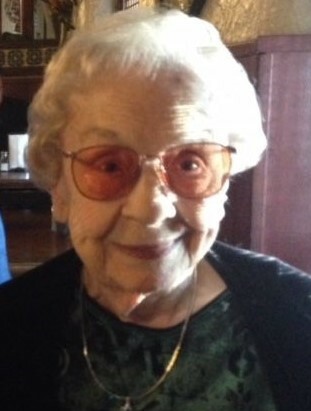 She was born at home in Crawfordsville, Indiana on July 12, 1918.  She graduated from Crawfordsville High School and worked in her grandfather’s real estate office until she married Clyde Arnett in 1939.

Clyde joined the U.S. Army in 1944 and had a distinguished military career until he retired as a Lieutenant Colonel in Tucson, AZ in 1966.  Jeanne was a remarkably strong and resilient military wife.  She and the family (sons Earl and David and daughter Carole) lived in Austria. Japan, Okinawa, Indiana, California, Washington DC, Chicago and Baltimore.

After retirement in Tucson Jeanne and Clyde travelled, played bridge, read books and participated in club and church activities.

Clyde died in 1996 at the age of 80, but Jeanne continued to thrive in Tucson.  She was an active member of the Military Widows Association and belonged to Desert Neighbors for many years. She was an excellent bridge player, drove her car until she turned 98 and lived independently until 100. One of her greatest pleasures was her weekly lunch out with her daughter and granddaughter, which she referred to as the Lovely Ladies Lunch Bunch. She is survived by daughter Carole McMullen, son-in-law Rob McMullen (whom she considered a third son), granddaughter Stacey McMullen, all of Tucson, son David Arnett and daughter-in-law Vivi Arnett of Sedona, AZ and Earl Arnett in Baltimore, MD.

To send flowers to the family or plant a tree in memory of Eleanor Arnett, please visit Tribute Store

Share Your Memory of
Eleanor
Upload Your Memory View All Memories
Be the first to upload a memory!
Share A Memory
Send Flowers