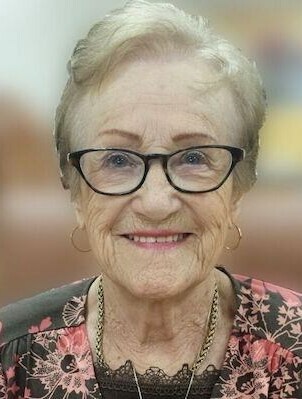 On September 3, 2021, Lala, age 97, devoted wife and mother, loving grandmother and great-grandmother, rejoined her beloved Stanley, who predeceased her in 2014. They were married 67 years. Lala was the youngest of eight siblings, all now deceased, born to Boleslaw Karolski and Julia Bergier, née Bergier, in Blanowice, Poland.

When WWII broke out, interrupting her education, Lala fled home with her sister Roza. Both worked in Czestochowa and Vienna for several years before reaching Italy to live with their married sister Anita. Each move meant having to learn a new language, along with all the other hardships of the war, including occasional starvation. Lala and Stanley met in Italy, where he was a soldier with the Allied Forces under the command of the British. After the war they married in England and settled in Wolverhampton, where their two daughters were born.

Because persons displaced by the war were discriminated against in England, life was hard for them, and the couple immigrated to the US in 1956, crossing the stormy North Atlantic in March aboard the RMS Queen Elizabeth. They settled in Chicago, where their son was born. Lala worked at numerous jobs, often on evening shifts so she could be home with the children during the day, to help build a new life for the family. She eventually retired from Western Electric when the couple moved to Tucson in 1980. Here Lala found a new career at IBM, where she became renowned for her soldering skills in assembling flawless circuit boards; efficiency experts even studied her technique. Lala was very much missed when she finally retired in 1985.

Her family was always her first priority, and Lala was its heart. All benefited from her skills as a seamstress, knitter, cook, baker, organizer, and storyteller. The couple were active in their neighborhood association and in the Polish American Club, for which Lala annually made dozens of pierogi and other treats for Tucson Meet Yourself.

Stanley and Lala also were adventurous world travelers, visiting China, Australia, New Zealand, Egypt, Greece, Turkey, Israel, Scandinavia, Russia, and many other lands; cruising in Polynesia, around South America, in the Caribbean, through the Panama Canal, and on the Danube. When home, they doted on and spoiled their grandchildren. Grandma always had candy in her purse, which she sneaked to them, reminding them not to tell their parents.

The family thanks Rose Muzzy and Lisa Mach for all their support, and the wonderful staff at The Edison House and at Emblem Hospice for their compassionate care during Lala's decline.

A Funeral Mass will be celebrated Friday, September 10, 2021, at 10:00 a.m., at St. Francis de Sales Church, followed by entombment at Our Lady of the Desert Cemetery and Mausoleum. All are invited to a luncheon afterward at the Parish Hall. Please follow Covid masking and social distancing precautions.

To send flowers to the family or plant a tree in memory of Aurelia Nowicki, please visit Tribute Store
Friday
10
September

At the Parish Hall after interment