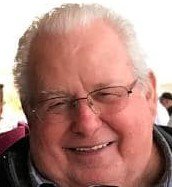 Richard Weichert was born May  1, 1943 in Eau  Claire, WI. And passed away May 12th, 2021 only days after celebrating his birthday.  His wife Patricia Susanna-Weichert was at his side when he took his last breath and went peacefully in the hands of God.

He served his country in the US Navy during the Vietnam War from 1960 to 1966.  His rank was ES.  He was stationed in San Diego, CA and Yokosuka, Japan on the USS Piedmont AD17.

He is survived by his loving  wife Patricia and shared the joy of her daughters Jacqueline Shell and husband Dustin Shell,  Tina Harris and Justin Harris and their two sons Dylan and Aiden and her son Jay Susanna.

He is survived by his sisters Barbara Harrison, Judy Carabetta, Mary Routt and deceased sister Carol Wilson,  and several nieces and nephews.

He worked over 30 years as a used car parts salesman. Loved playing golf although he admitted he wasn’t very good  and loved watching Nascar.  Richard and Patricia were only married for a short 7 years but packed a lifetime of memories in that short period.  They truly enjoyed each other’s company and were rarely seen apart. They enjoyed traveling especially their trip to Ireland, and their road trips to Laughlin, Branson, and all the stops on the way to  Indiana to visit Patricia’s family.  They went on several cruises their favorite being to the Panama Canal.  He became a fan of bingo after meeting his wife Patricia.

He was a member of the American Legion Post 7,   Elks #2663 and the Fraternal Order of Eagles #180 all for over 25 years.  He was a great volunteer especially at the Eagles where he was a Trustee for over 20 years.

He was a kind and gentle man, willing to help anyone where needed. He was a friend to all. He will be  greatly missed.

To send flowers to the family or plant a tree in memory of Richard Weichert, please visit Tribute Store