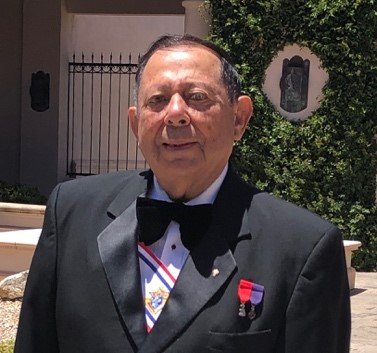 Louie (Luis) L. Cooper, born Sept. 17, 1942, joined his beloved wife and high school sweetheart, Rosalie, parents Harry P. Cooper and Eva L. Cooper, and his brother Richard Cooper in heaven with the Lord on July 12, 2020. Louie, a 1962 Pueblo graduate, was a University of Arizona alumni, played trumpet in The Pride of Arizona marching band and closely followed the Wildcat football team. Louie enjoyed treating the family to annual summer vacations, which preserved family memories that will continue to be cherished. Music was dear to his heart as well as many forms of creativity such as writing poems. Like Geppetto from his favorite movie, Pinocchio, Louie would often be found in his woodshop crafting gifts such as decorative bridges that adorn his family members’ backyards and customizing toys for his grandchildren. Pinocchio was a large inspiration to his soul as well as anything else that brought out the pure of heart and childhood joy. Louie also had a talent for restoring vintage toy pedal vehicles. He was a devoted member of the Knights of Columbus, Council 1200 and served as a grand knight and recently earned his Fourth Degree, the highest degree of the order. TaTa, to many, will be forever missed. Louie and Rosalie’s favorite 50’s oldie but goodie love songs will bring fond memories to the hearts of their survivors, daughters, Judith Cooper-Wagoner and Elizabeth Venker, brother Alexander L. Cooper, sister Norma Santa-Cruz, three grandchildren and five great-grandchildren. He was laid to rest at Holy Hope Cemetery after family mass at St. Ambrose Church

To send flowers to the family or plant a tree in memory of Louie Cooper, please visit Tribute Store

Share Your Memory of
Louie
Upload Your Memory View All Memories
Be the first to upload a memory!
Share A Memory
Send Flowers