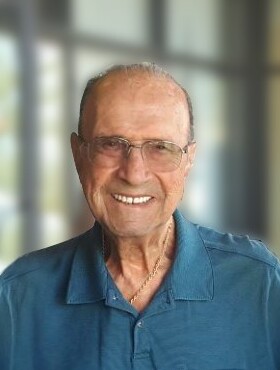 At the age of 10, Al’s family moved from Utica to Los Angeles, California where he began his lifelong passion for sports. He attended George Washington High School where he excelled in his studies and was very popular with his friends and on the football field. He attended Loyola University where he participated in ROTC and graduated with a degree in Business Administration and Finance.  He enjoyed a busy social life on campus and met his wife at her Kappa Delta Chi sorority exchange with his fraternity. After graduation, Al joined the Air Force as a 2nd Lieutenant and was quickly promoted to a 1st Lieutenant.  He married Rosemary on August 10, 1955 and they moved to Kirkland, AFB in Albuquerque, NM where Al was stationed. A year later, they moved back to Southern California and started their family. In 1958, he was hired at Hughes Aircraft Company where he worked for 30 years, first as a Contract Negotiator and later a Business Manager. He enjoyed coaching his son’s Little League baseball and Pop Warner football teams. Al enjoyed baking and his zucchini bread and biscotti became favorites.

In 1973, the family moved to Tucson, AZ, and remained there, calling Arizona home.  Al and Rosemary enjoyed traveling with friends and attending Arizona Wildcats sporting events.  Al’s sense of humor and big personality will be dearly missed by many.

Family and friends are invited to attend a mass in his honor on Saturday, January 8 at 10:00 am  at St. Mark the Evangelist Catholic Church, 2727 W. Tangerine Road, Oro Valley, 85742. Those wishing to do so may contribute in his memory to: St Michaels Indian School, Lupton Rd, St Michaels, AZ  86511