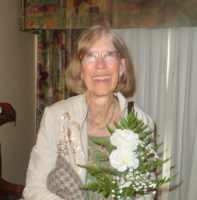 Mary “Caroline” Morrison was born in 1935 in East Prairie, Missouri to two school teachers, Nancy “Juanita" and Daniel Thomas Attebery.   The family moved to Lincoln, IL when she was 13 and she later graduated from Lincoln High School.   She spent four “lovely” years at Greenville University and graduated with a Bachelors degree in Elementary Education.  She tried student teaching, but concluded it was “not for me.”  She went back to school and graduated from the University of Illinois at Champaign-Urbana with a Masters in Library Science in 1959.  She began working in the Children's section of the Springfield Public Library where she met Jack William “Bill” Morrison in March 1962.  After a whirlwind courtship, they married.  Caroline retired from the library after 30 years of service and they moved to Sailboat Bay at Gulf Shores, AL.  After one particularly bad hurricane season, they moved to the Saddlebrooke Retirement Community in Tucson, AZ in 1999.

Caroline was a kind, caring person who had a perpetual sunny outlook.  She was an avid reader who shared her love of books, especially science fiction and fantasy, with her children and grandchildren.  She also enjoyed drawing when her children and grandchildren were small and charmed them with her pencil sketches.  She and Bill loved traveling to both exotic locations and to wherever they could drive in their motorhome.  Upon moving to Saddlebrooke, she joined her dear Sputters, became an avid putter, and to her and her children’s surprise, was quite good. She enjoyed the friendships she made at both Sputters and with her pool pals. Caroline’s warm personality and perpetual good humor, made her a role model for us all.

She died peacefully on August 19, 2021 in her bed surrounded by loved ones.

A celebration of life will take place at a future date.  In lieu of flowers, consider adopting an elephant orphan or donate what you can to Sheldrick Wildlife Trust at https://www.sheldrickwildlifetrust.org.