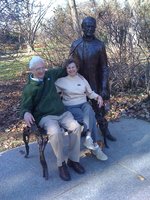 Jacqueline Louise Schroedter Kinman, 82, of Tucson, died on Oct. 7, 2020, Jackie was born on Dec. 7, 1937 in Ross, CA., grew up in China Lake, California, and married her beloved husband, Tom, in 1963. They moved to Tucson in 1969. Jackie was a longtime member of Self Realization Fellowship Church and a part of SRF’s Tucson Meditation Group, where she was a spiritual companion and guide to many during her 42 years of membership.

The black and white picture of her above was taken in the early 1960s when she worked at Lockheed, as part of a women in science promotion that the company was doing. Her work at the time was to help plot gravity assist trajectories for space probes to visit the planets in our solar system. This was the pioneering work that led to the trajectories of the Pioneer and Voyager probes, which are now leaving the solar system. And the dress she is wearing—she designed and made that herself during her off-hours.

Back in the 1960s she observed a star wobbling back and forth slightly over time and theorized that this was due to a planet orbiting that star. Such an observation was at the cutting edge of the resolution of the equipment she was using, and this became an excuse for her male bosses to reject her findings. Decades later those findings were confirmed, but not before men took the credit for those and other discoveries.

It has always been a blessing to us as her family to know that she played an important role in sending the first artifacts of humanity outside the solar system…. and that she may have been the first human to make an indirect observation of a planet outside our solar system. She always thought big—much larger than most of us with our parochial minds and imagination. And she similarly felt big.

Jackie was known for her generous heart, joyful spirit and desire to serve. She and Tom were inseparable. In addition to her husband, Jackie is survived by their sons, Ian (Kathryn) and Mike (Robin), and grandchildren, Schroedter and Hayden.

In addition to being a scientist, wife, mother and grandmother, throughout her life, Jackie worked as a computer programmer, math tutor, bereavement counselor and coordinator and financial counselor. At the time of her death, she was helping design a Monarch Butterfly Waystation for her neighborhood.

Jackie’s memorial service will be on Thursday morning, October 15 in Tucson. It will be a private affair, but arrangements for it to be live-streamed—we will be posting more details soon. In the meantime, in lieu of flowers, the family is requesting that donations be made to the hospice which provided her with such a dignified and comfortable end: https://casafoundation.org/donations/ as well as the Self-Realization Fellowship Tucson Meditation Group - 1702 E Prince Rd, Suite #140; Tucson AZ 85719.