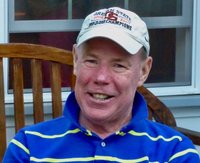 74, of Tucson passed away on August 19th. He was born in Salt Lake City, Utah to Jim and Mary Alice Dee Leineweber, who preceded him in death. He is survived by his wife of 47 yrs., Virginia and his four children: James (Christine), Judyann Martin (Chris), Joseph (Kyleen), and Abigail Lake (Matt). He was Pop Dan to his 12 loving grandchildren. Dan was the oldest brother to Greg, Bob, Bill, Maryanne Deagen and Sally Moggenburg. Dan was a Civil Engineer in heavy construction. His career eventually brought him to Tucson, where the family has been settled for the past 37 yrs. Donations in his honor may be made to St. Vincent de Paul Society at St. Thomas the Apostle Church.